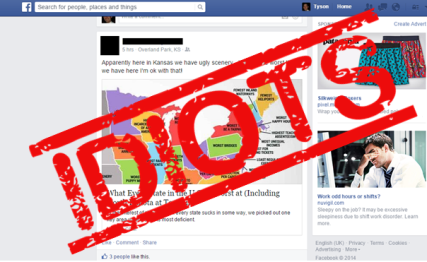 (Note: I missed an entry last week because I was in Austin, Texas, for SXSW. Stay tuned for a piece about that!) 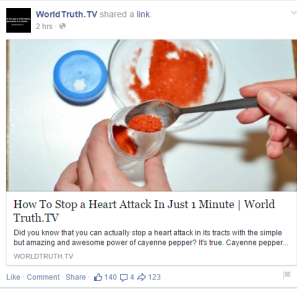 The reality: Go ahead and try it! The next time you or someone near you is having a heart attack, assuming cayenne pepper powder is conveniently nearby, give them some. Fuck calling 911. See what happens.

Right away, we cannot trust what these quacks have to say. In the above article, they even say, “It should be noted that these men, and many other healers like them, were speaking from personal experience and not speculation when referring to this powerful plant.” For fuck’s sake. In the world of real science, personal experience (i.e. anecdotes) is speculation.

Even this website, which is all about natural medicine fuckery, warns its audience that maybe you should call 911 instead. When posing the question can cayenne pepper help prevent heart attack the website asserts “probably yes.” In hippy terms this means “no, but we have to keep our minds expanded for possibilities.” And impending death. 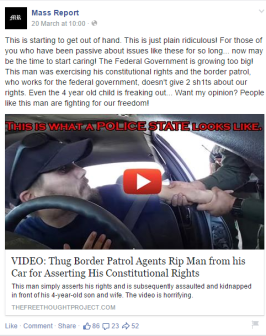 The story: I’ll let them explain

A shocking video posted to youtube Monday shows what life in a police state looks like. A family was on their way back from a doctor’s appointment when they drove through a checkpoint that was staffed by tyrants.

Rick Hebert was simply traveling through the checkpoint and lawfully refused to tell the agents where he was going. This checkpoint was well inside the US border on Highway 89 North.

At these constitutionally questionable checkpoints, you are not required to answer the agent’s questions (usually starting with “Are you a United States citizen?”). Nor can the agents require you to consent to any searches.

Apparently the agents at this checkpoint are unaware of the constitution.

The man was arrested. THIS IS TYRANNY!!!!!

The reality: The man in the video did in fact cross border patrol and did in fact refuse to answer any questions. And yes, the border patrol did in fact arrest the man for not complying. You can question the constitutionality of border checkpoints all you want. The fact remains that they currently exist in the confines of the law. With that said, let’s explore that law.

To start, the article is quick to point out the incident occurred “well inside the US border.” More specifically, it’s 35 miles north of El Centro, Cali., which is 10 miles from the Mexico border. According to the ACLU, there is a 100-mile border zone. In other words, the geographical location is insignificant.

The man in the video was practicing his Fourth Amendment rights, much like people often do when they are pulled over during a traffic stop. Unlike a traffic stop in most areas of the country, Fourth Amendment laws do not apply within the 100-mile border zone. More accurately, “federal authorities do not need a warrant or even suspicion of wrongdoing to justify conducting what courts have called a ‘routine search,’ such as searching luggage or a vehicle.”

The man was right about one thing: He had to answer the question about citizenship. But before you think you’re being a political vigilante badass, get your laws straight.

And don’t look like a meth addict. That helps too.

This guide tells you all about the healing power of crystals! 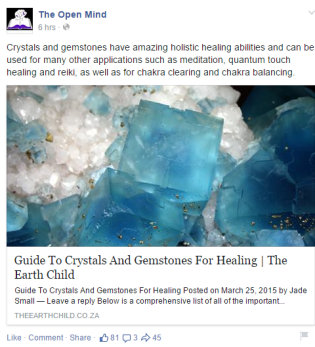 The story: Check out this comprehensive of healing crystals and gemstones. Clear your chakra and shit! YEAH, MINOTAUR!

The reality: Healing crystals/gemstones are a crock of shit. I shouldn’t have to emphasize that point, but goddammit, here we are. Let’s break it down a bit more.

Do crystals have some association with electricity/energy? Yes, they do. As noted by the Skeptic Dictionary, crystal atomic properties have made them very valuable in the electronic and optical industries. However, no peer reviewed scientific study has validated crystals’ usefulness in healing anything. Not a single one.

Actual doctor Dr. Christopher French, PhD, conducted a study about healing crystals. The verdict? Any physical symptoms experienced by idiots who believe this were the result of the power of suggestion. In other words, by merely believing it will work, idiots will manifest physical sensations or mistake ordinary, insignificant, every day sensations with the effects of the crystal. This is also known as the placebo effect and confirmation/cognitive bias.

This is not too unlike the power of “The Secret”, praying or any other form of pseudoscience that claims to improve one’s psychological/emotional state and therefore there physical well-being and professional life. There is a positive correlation between positivity and health/success. There may be some correlation between healing crystals and positivity, but science proves it’s the result of the placebo effect. Correlation does not equal causation. A very important distinction.

According to the list, diamonds are good for all brain diseases. Ironically, believing that typically suggests brain damage. Kunzite is good for alcoholism. It doesn’t say whether or not it’s good for curing or causing alcoholism, but I’m assuming the latter. Dark opals are designed for the reproductive organs. Shove a couple up your genitals and never reproduce…please. 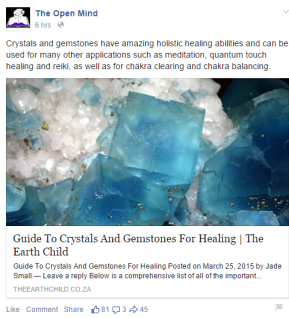 The story: Turmeric is an ANCIENT (buzzword!) ayurvedic (smart word!) that’s an anti-inflammatory and antioxidant. Oh, and it’ll stop cancer from happening. No big deal.

The reality: Take a wild guess what the verdict is on this claim…IT’S ACTUALLY DOES CURE CANCER! I just wanted to point out an incredible claim that is finally true.

Let’s go to the Mayo Clinic website and do a keyword search for “curcumin” the active ingredient in turmeric. Here’s the very first sentence in its entry: “At this time, there isn’t enough evidence to recommend curcumin for preventing or treating cancer, but research is ongoing.”

Here’s another gem (an actual healing gem) from that Mayo Clinic entry: “As always, talk with your doctor before using any herbal supplement.” Yeah, do that. And expect this response: “GTFO out of my office. I’m doing real work here.”

People who believe this will be quick to site this National Institute of Health study, and this one and this one. They all have favorable things to say curcumin. I’m also willing to bet they will intentionally leave out this NIH entry, which is their official stance on the healing properties of curcumin. Here’s a list of what curumin is ineffective in treating: 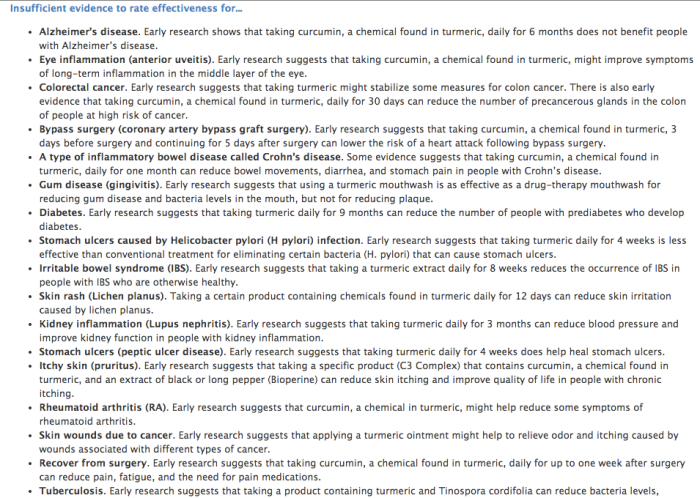 There’s a lot more, but my screenshot only covered that much. Now for a list of what curcumin is effective for:

Note the word “possibly.” So if your stomach or wrist hurts, curcumin might or might not do something.

Go ahead and visit Dr. Ima Dumbfuck, N.D., for your medical needs. The rest of will see Dr. Science, M.D./D.O., and have a life expectancy greater than a pauper in medieval London.

On the last episode of Soundtrack of the Week: Ty just got back from SXSW and he noticed something: Everything and everyone was there on business. Can a festival maintain it’s original status and be cool at the same time? Have corporations ruined concerts and other events? Or have WE peed in our own swimming pool of coolness? Also, nobody cares about St. Patrick’s Day, Jay’s phantom virus, Meredith watched a man die, Starbucks has ended racism and more!