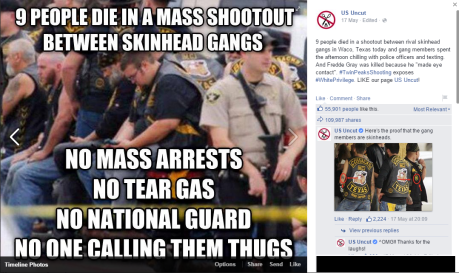 The story: A bunch of white people get into a gang war AND LOOK AT THESE STATS! Law enforcement would never treat a black gang war like this! RACISTS!

The reality: Let’s just assume that the stats in the above picture are factual (SPOILER ALERT: They are not). Even after giving them that much, there is a laundry list of logical fallacies that poke more holes in their argument than the bullet holes at the Twin Peaks in Waco, Texas.

Base rate fallacy – “Making a probability judgment based on conditional probabilities, without taking into account the effect of prior probabilities.” Ex: Riots involving black people end up in tear gas, mass arrests, etc. How probable is it that the same happens to white people? This statement ignores the fact that what happened in Waco is completely unrelated to anything that happened in Ferguson and Baltimore. Therefore, basing probabilities between the two is…well…dumb.

False equivalence – “Describes a situation where there is a logical and apparent equivalence, but when in fact there is none.” The only thing this gang shooting and Ferguson/Baltimore riots had in common is the fact that cops were involved. The latter were protest riots. The above picture is in regards to a gang shootout. If this were a bunch of white people protesting the killing of an innocent person by cops, we may have an argument. But that’s not what is happening. These two situations are not equivalent.

Fallacy of the single cause – “A fallacy of questionable cause that occurs when it is assumed that there is a single, simple cause of an outcome when in reality it may have been caused by a number of only jointly sufficient causes.” The reason why the Waco incident didn’t result in tear gas, mass arrests, etc. is because the gang members were white. No other reason. Only one single cause within a multilayered event. Hmmmmmm…

Faulty generalization – “A conclusion about all or many instances of a phenomenon that has been reached on the basis of just one or just a few instances of that phenomenon.” It may be true that when it comes to law enforcement and the gathering of people, there is #WhitePrivilege. There is no doubt that there is targeting of black people among police officers…a previous Facebook Fallacies revealed that. But if your proof is comparing ONE example to TWO examples, you have committed faulty generalization. Learn how to prove a point.

The above logical fallacy infractions are based on the assumption that the facts represented are true. They are not. To start, this was not a shootout between two skinhead gangs. It was between two biker gangs, SOME of whom sported some Nazi symbols. However, one gang is called the Bandidos, which is named after Mexican bandits. Probably not skinheads.

No mass arrests? LOLOLOLOLOL. Apparently, 170 arrests do not fall under the “mass” category. We have certainly raised the goalposts on that one. There was no call to the National Guard because it ended relatively quickly. No prolonged aftermath of destruction. As for the labeling of “thugs.” It seems that overtime that word has been equated to black criminals. Definitions change. Even if I’m wrong about that, the above mention of the word suggests that we don’t see these gang members as criminals, which is fucking retarded.

Look, #WhitePrivilege as it pertains to law enforcement is very real. There are many intelligent ways to argue that. The above picture may be the dumbest way. Great job!

#WhitePrivilege is a lie!

The story: White privilege does not exist! It is made up by people who hate white people! LOOK AT THESE POOR WHITE KIDS! /debate

The reality: Speaking of white privilege: This submission comes from the infamous #CrazyFacebookRepublicanMilitiaGuy. Hopefully he doesn’t read this because 1) I rely on his posts for material and 2) I rely on him not hating me to avoid getting shot in the abdomen. If I die of a gun wound, submit this for evidence.

Sooooo many fallacies here, so I’ll just pinpoint the obvious ones. First, appeal to emotion. The use of imagery by showing very poor and dirty white children evokes emotion that is hard to ignore. I’m emotionless, so I see past this bullshit. Also, what year was this photograph taken? During the Great Depression? If so, your argume 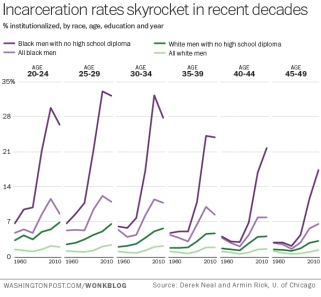 Another glaringly obvious issue with this logic is the lack of…logic. Claiming white privilege doesn’t exist because it’s only something white haters say is void of any supporting evidence. I think white privilege exists and I LOVE white people. That’s anecdotal evidence, I know, but I’m willing to bet a survey will reveal a similar sentiment.

But don’t listen to me with these stats. Like the saying goes, there are lies, damn lies and statistics. According to #CrazyFacebookRepublicanMilitiaGuy, I’ve been indoctrinated…by facts, apparently. 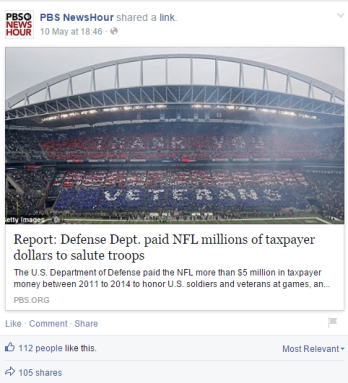 The story: The NFL is charging the Department of Defense MILLIONS of dollars to salute our soldiers. They hate America! WARRRGRRBLLLE OBAMA WRRGRGRBLE!

The reality: Way too many only read the headline and nothing else. I saw a number of tweets and Facebook posts demonizing the NFL for having the gall to have the military pay to salute our men and women in uniform. That’s not what happened, and I’m here to set the record straight.

The fallacy being committed here is THE INABILITY TO READ. Just read the article and you’ll learn that the DOD is the one to be mad at. The NFL did not tell the military that they have to pay up if they want some time on the field or jumbotron. Quite the opposite. The military came up with the idea.

Long story short, the DOD has a shit ton of money reserved for marketing and advertising. They took $5M of that money and told the NFL they would like some ad space during games. That ad space came in the form of recognizing soldiers on the field, jumbotron and other subliminal ways. Not necessarily television commercials. It was justified as a recruitment tool.

Too be honest, this marketing scheme was nothing short of brilliant. Genius, in fact. Everyone thought that the military was allowed to give praise to a soldier during a football game, because Murica! We felt more national pride being a part of it. Meanwhile, the whole thing was just a marketing scheme in hopes you would feel that way, and some of you would enlist based on that national pride derived from the seemingly innocent military praise by [insert your favorite NFL team].

Despite whether or not you read the story correctly, we’re all idiots for buying into the scheme. Then again, it was goddamn brilliant.

The story: Several different YouTube videos from around the world have documented trumpet-like sounds coming from the sky. No one can explain it! IT’S THE APOCALYPSE! AHHHHH!!!!!!!

On the last episode of Soundtrack of the Week: I really love this episode. It’s about public shaming on social media. If you’re on social media, you have probably casted a stone at someone who did something rather insignificant. Shaming is effective in curbing bad behavior, but have we gone too far? Has the power of the internet turned us into Social Justice Warriors or into monsters? Also in Episode 239: