The story: A homeless black lady was sent to jail and had her kids taken away for interviewing for a job…essentially. Meanwhile, this white bitch basically killed her child and got away with probation…essentially. White privilege! SEE?!?!

The reality: I want to start off by saying that white privilege – especially as it pertains to the justice system – is alive and well. So if you’re going to argue that point, I promise you that there is plenty of statistical evidence to make your case. Anecdotal evidence has no value…especially when it is dead wrong.

Let’s start with Shanesha Taylor. According to NBC News, Taylor left her two children in a car that authorities say reached temperatures exceeding 100 degrees with the infant crying and sweating profusely. Once her mugshot went viral, the internet raised more than $100,000 for her in support. This is where things get interesting.

A judge offered her a plea bargain that included depositing $60,000 of that money into a trust fund for her children in lieu of punishment. She did not. Instead, a prosecutor told ABC News that not only did she never show up to any of the job interviews they landed her, but additionally, she spent $6,000 at a music studio for the baby daddy’s rap album.

From there, the judge said “Fuck it” and handed her a sentence: 10 years of probation, undergo parenting classes, pay restitution and…she kept custody of her kids. No jail time and loss of children as the image above explicitly tells us.

Meanwhile, the pink hair “parent” above did in fact drive with her baby on the roof of the car. However, no credible news source is reporting that the distance was 12 miles (not like distance really matters after a certain point). In the end, she was sentenced to 16 years of probation.

Essentially, both women were handed a sentence that was more or less equal. In a moment in time where racial tensions are increasing, it does us no good to spread misinformation. Such negligence in reporting is used as fodder for the idiots who are denying that racial injustice exists. Quit feeding the trolls by believing and sharing every article that fits your narrative. It took me less than two minutes to dismantle the above image.

The story: Hillary Clinton said something very similar to Hitler! OMG! Both of their names contain the letters H, I, L and R! OMFG! HILLARY IS HITLER!

The reality: Let’s revert to the original meaning of Facebook Fallacies and point out the logical fallacy in the above argument. This one falls under the Reductio ad Hitlerum fallacy, i.e. “reduction to Hitler.” That’s right. Illogically comparing things to Hitler is so prevalent that we had to give the phenomenon its own Latin word.

Suggesting that similarities between someone and Hitler equates to supporting and implementing Nazi principles has many holes. To start, it suggests that every single thought, opinion, belief, etc. expressed by Hitler was evil af. Hitler was a giant asshole, yes, but even he said things that weren’t bad at all. It also erases the lines between cause and effect.

According to the logic used in the above image (as pointed out in a Wiki entry), painting, enjoying classical music, owning dogs, advocating good roads, demonstrating nationalistic patriotism, or speaking well can all make someone a Nazi supporter. Despite – you know – the Holocaust, Hitler did have policies that were good. Also using the above logic, every goddamn Republican is Hitler considering their demonstration of “nationalistic patriotism.”

Contrary to popular belief, Hitler wasn’t even the worst person to walk the earth. I think Hillary’s campaign should attack her opponents by comparing them to Joseph Stalin, Pol Pot, Mao Zedong, Genghis Khan or Leopold II of Belgium. Logically fallacious? Yes. Historically more accurate in terms of body count and damage? Absolutely.

Chuck Norris Hates Obama So Your Argument Is Invalid 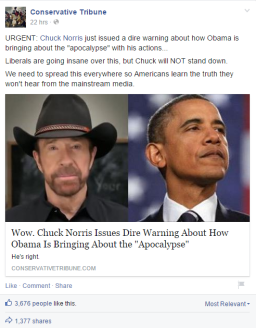 The reality: Chuck Norris said something that had nothing to do with martial arts or acting. It’s not logical to automatically dismiss Norris’ words because of this, but it’s also illogical to take his word for it. This falls under the “appeal to authority” and “false authority” logical fallacies.

“False authority” is defined as “using an expert of dubious credentials or using only one opinion to sell a product or idea.” In this case, The Conservative Tribune is using Chuck Norris’ (an “expert” of dubious credentials) comments to sell the idea that Obama is a terrorist or whatever. Other than expressing his political opinions and hanging out with cool cats like Mike Huckabee, Norris has no formal education or direct experience in politics.

But let us entertain the idea that Chuck Norris is very well versed in the world of politics. “Appeal to authority” is based on the following (as explained by Wiki):

A is an authority on a particular topic

A says something about that topic

A is probably correct

This is one of the favorite logical fallacies of anti-vaxxers. There’s like maybe 10 board certified doctors who think vaccines are evil, so anti-vaxxers latch onto them, despite the fact that 99.999 percent of the science community has proven through empirical evidence that they are full of shit.

But none of this matters, because we are talking about Chuck-fucking-Norris, and we are all dumber because of this. 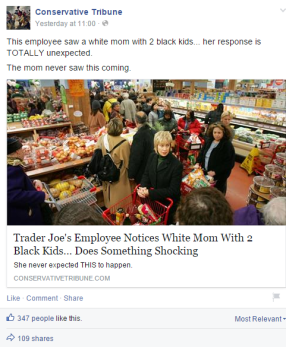 The story: Two unruly black children were making a scene at Trader Joes despite attempts by their white mother (they were adopted) to calm them down. An employee went up to them and…handed her flowers in sympathy. There is no racism in America! IT’S OFFICIALLY OVER!

The reality: If you think my narrative of having them claim that racism is overblown because of the above example is a bit over-the-top, it’s because it is. It’s also almost exactly what they tried to do at the end.

After The Conservative Post told the heartfelt story of people being kind to black babies, they went on to say this:

The media would like us to think that racial tension is at an all time high and they are seemingly willing to do whatever they can to inflame and incite racial bias.

We all need to hear stories like this that show that the liberal narrative of a racist nation is largely untrue.

I shit you not. That is a direct quote from the same article. I don’t even know where to begin, so let’s start with the fact that a white person was involved in their claim of racism being overblown. Their ONE example of how we are accepting of black people involves a WHITE mother of two black children.

The Trader Joes employee could tell the children were adopted and only then felt compassionate about the situation. Would the employee feel the same if it was a black mother trying to raise her two black children? I can only speculate, but I’m going with “no.” Disproving racism because of a situation involving a white mother is asinine.

Which logical fallacy does this fall under? The “anecdotal fallacy,” which is “using a personal experience or an isolated example instead of sound reasoning or compelling evidence.” Even if the mother was black, it doesn’t mean anything on a larger, societal scale. One person was nice to a black person? RACISM OVER!

There is a mountain of evidence to support the “liberal Jew media” claims that this nation is divided by racism, either direct or indirect. For example, a report in Ferguson, Mo., revealed that a disproportionate amount of black people were searched during routing traffic stops despite stats showing that white people were more likely to possess drugs when searched. That’s what we call evidence, and it can be used to logically support the claim that the above article is wrong at best and insanely dangerous to society at worst.

On the last episode of Soundtrack of the Week: Kangaroo Knife Fight joins the podcast for an in-depth interview discussing the band, music, who’s the most likely to go into a drug-induced downward spiral and much more. Keep these guys on your radar…they’re going places, and SOTW got to them just in the nick of time. Also in Episode 235: Meredith won’t go away, radio is trying to podcast, Wolfgang enters the world, capitalism explained via promo day at Kauffman Stadium and more!