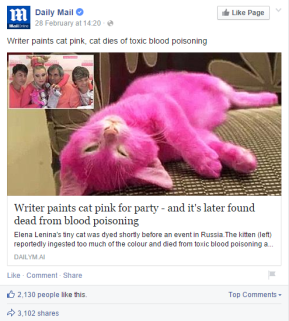 The Story: Crazy cat lady and Russian writer Elena Lenina dyed her cat pink for a pink-themed party. Unfortunately, the dye was toxic and now the kitty is dead. RIP, pink pussy.

The Reality: Russian (regional) celebrity Elena Lenina did in fact dye her cat pink for some stupid party where everyone and everything is in pink. The good news is that the cat never died. The bad news is that the party still happened and Lenina is considered a writer.

After the story went viral, Lenina went on social media to show the cat alive and well. How exactly The Daily Mail decided to print that the cat was dead without verifying anything is beyond me.

As a journalist, the very first thing you do when reporting on someone else’s original piece is to verify the information, i.e. do your own original reporting with the information obtained from the initial article. This is standard procedure at the magazine I work for, and we’re a magazine for truck drivers. I would expect larger publications to be held to a similar or higher standard, but perhaps I’m asking for too much.

The real crime is that Lenina is credited as a writer first. She is actually some hot model/actress who happens to get book deals as a result. Chuck Klosterman is a writer. Elena Lenina is a professional hot blonde. Also, do not dye your pets’ fur. Crazy assholes do that. Don’t be that guy.

Cops murder an innocent homeless man FOR NO REASON!

The Story: LAPD officers are seen on a viral video “executing an unarmed homeless man in the street.” The mentally ill man did nothing wrong and was merely trying to protect himself from 5-8 grown men in uniform before senselessly being shot point-blank. Fuck the police!

The Reality: This is going to be one of those entries that sparks controversy since it’s a hot topic right now. Unlike the Illuminati or internal energy vibrations, police shootings are very real. However, facts are either misrepresented or omitted to adhere to a particular narrative. Both sides are guilty of this. The above article did a great injustice to the entire context of the situation.

To start, police officers didn’t randomly approach a homeless man, which led to a scuffle. According to ABC News, the police chief said officers initially arrived at the scene to investigate a robbery. When the homeless man, called Africa, was approached, he did not cooperate and became combative. Already, the above account is missing crucial pieces of information.

According to this L.A. Times article, LAPD Chief Beck revealed evidence supporting the department’s claim that Africa had reached for an officer’s gun during the incident. In other words, several officers did not go up to a homeless man, start beating him and then shoot him at close range for no reason whatsoever, as the article in question suggests. Police can shoot anyone under the reasonable assumption that their life was in danger. The officer who shouted that Africa had the gun was a rookie.

Also, Africa is a convicted bank robber. Additionally, three governments in three different countries didn’t know what to do with him, let alone claim him. Officers may not have known any of this at the time, but a bank robber with a mental illness is crucial information. One can assume Africa may not have been the most mild-mannered, intelligent human being. This can lead to problems when dealing with cops.

In the end, the news is still very fresh and new details are coming out every day. I implore everyone to hold back on their opinions, assumptions and overall narrative in police shootings until enough information is available to form those things. Believe it or not, some police shootings are justified. Is this one of them? I don’t know yet and neither do you.

These photorealistic CG images are… super realistic! Click to see!

The Story: You gotta check out this computer graphic artist’s images that he created. They look exactly like the real thing! How did he do it?

The Reality: Before we get down to it, let’s check out some of these amazing images created on a computer:

Damn. That’s some awesome work. Seems too good to be true. That’s because it is. Shortly after the images went viral, artists David O’Reilly and Kim Laughton confessed that all of the images were actual photos, not CG images. On social media, O’Reilly noted that the joke should have been obvious and explained the whole ruse was to point out some faults in the CG world. He claims it was never intended to go viral. He probably never guessed it would also point out how awful media sites like Gawker Media, HuffPo and The Mirror are at journalism.

As a journalist, whenever something comes across your desk, you are supposed to…FACT CHECK! *gasp* In this case, fact checking could have taken literally 60 seconds. Look what happens when you Right Click + “Search Google for this image” the poppy picture:

There are more than 10 pages of search results, most of which reveal flower wallpaper of the exact same image. A search for the other images reveals similar results. Anyone who has trolled for sex on Craigslist tried online dating sites knows this trick.

Lunches at U.S. schools are the worst in the world! Thank, (Michelle) Obama! 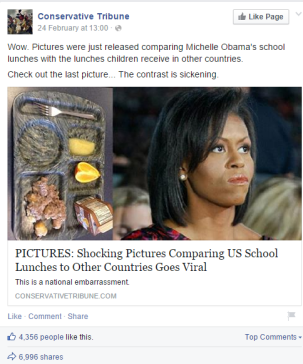 The Story: After spending years pushing for better, healthier foods in our schools, Michelle Obama has failed miserably. Look at the pictures of our food compared to school lunches across the world! What an Obamanation!

The Reality: Yet another bullshit picture entry. The Lesson of the Week: Don’t trust images online. Let’s break this down frame by frame. Here’s a picture of school lunches from across the world:

Here’s a picture of a school lunch in the United States:

Jesus Christ, that’s disgusting! What the hell, Obama? Your liberal, health nonsense has proven to be really effective. Prison food is far more appealing than that…so I’ve been told. Starting with the image of the food from school lunches around the world: not real. Well, not exactly. The first image is a picture of food items that are likely to be found in a school lunch in various countries. It points out the cultural differences of what we eat. However, those are not actual school lunches. They never came from an actual school. But none of that matters, because here’s the real image of an American school lunch that accompanied the original article: 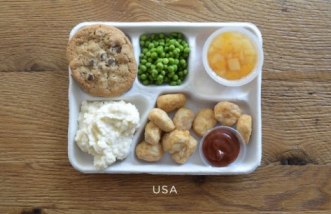 Mmmmmmmm. That’s much better, but please do not put ketchup on chicken nuggets, you goddamn heathens! Barbecue sauce or honey mustard or GTFO! As you can see, the second image above is complete bullshit. No one is really sure where the disgusting dish came from, but it was not from the original source highlighting differences in school lunches. From The Conservative Tribune:

There you have it. Those are samples from a bankrupt Mediterranean nation, a former second-world nation, a financially stricken European nation, a favela-ridden South American nation and some of our other allies.

Every single one manages to feed their schoolchildren in a more thorough, appetizing and seemingly humane way than the world’s lone remaining superpower (H/T U.K. Daily Mail).

First of all, the first paragraph is completely wrong, we now know. Second, The Daily Mail never said anything that remotely claimed other countries are feeding children in a more “humane” way. In fact, even though The Daily Mail had the bullshit picture as their header, they did include the original U.S. food picture. The Conservative Tribune did not. Sorry uber-conservatives, but facts can suck some times. Per Obama’s recommendations, eat a dick.

Whistleblower for the Centers for Disease Control proves vaccines are full of shit!

The Story: You gotta watch this nine-minute video documenting a former CDC researcher admitting they omitted data which reveals that black boys’ chance of autism due to vaccines increase by 340 percent! The government and Big Pharma are liars and want to kill your children!

The Reality: Never mind the fact that this is old news. Most of you have probably never heard of this, and vaccines are a hot topic again. Anti-vaxxers (dumbshits) know this and try to sneak this on us. Nice try, but we’re not all idiots like you. Allow me to retort.

Our narrator for this video is Dr. Andrew Wakefield. Who the hell is that? Dr. Wakefield wrote a research paper about vaccines and autism back in 1998. Unfortunately, that research has since been discredited by pretty much the entire scientific community. In science, other researchers must be able to replicate your experiment and come up with similar results. Otherwise, it’s bogus. Guess what happened when other scientists tried to replicate Wakefield’s results…

What’s surprising (but not really) is the fact that the research paper that the documentary tries to validate is…[drum roll]….that same Wakefield paper from 1998. Already, there’s a HUGE conflict of interest in who is involved with this “report.”

What about one of the CDC researchers who claims that the peer review group intentionally omitted data? Well, there’s a lot of context that was ironically omitted from the documentary, including this public statement from the “whistleblower” himself:

I regret that my coauthors and I omitted statistically significant information in our 2004 article published in the journal Pediatrics. The omitted data suggested that African American males who received the MMR vaccine before age 36 months were at increased risk for autism. Decisions were made regarding which findings to report after the data were collected, and I believe that the final study protocol was not followed.

I want to be absolutely clear that I believe vaccines have saved and continue to save countless lives. I would never suggest that any parent avoid vaccinating children of any race. Vaccines prevent serious diseases, and the risks associated with their administration are vastly outweighed by their individual and societal benefits.

So they did in fact leave out “statistically significant information,” but the researcher ultimately concludes that vaccines are still very important and should be administered. You won’t here the latter part of that statement in the video.

Another bit of information the video won’t discuss is the reason why “African American males receiving the MMR vaccine prior to 24 months of age or 36 months of age are more likely to receive an autism diagnosis” was omitted from the original paper. The CDC explains:

The Editor and Publisher regretfully retract the article as there were undeclared competing interests on the part of the author which compromised the peer review process. Furthermore, post-publication peer review raised concerns about the validity of the methods and statistical analysis, therefore the Editors no longer have confidence in the soundness of the findings.

Conflict of interest and questionable methods, both of which are big no-nos in scientific research. The ONE study that anti-vaxxers are trying to latch onto is full of holes and straight up awful science.

Note to anti-vaxxers: Your vaccinated baby has social and communication issues because of you, not because of vaccines.

On the last episode of Soundtrack of the Week, Word of God! Last time, we ended the Book of Joshua, so you know what that means. Oh. You don’t? Well, the Book of Judges is next. Hear all about anarchy from Ty’s interpretation of the bible. The gang also discusses the archaic practice of sucking blood from baby penises after a circumcision. Good times. Also, Meredith gives us a lesbian update, Jay’s mustache-themed coed baby shower, a very ’90s Sounds of the Week, bullying and more!