After a one-week vacation in Dallas, the SOTW Roundup is back! I’m using the term “vacation” loosely considering I have been unemployed since the end of July. This was the first time in god knows how long since I have left Kansas City. I learned two things while I was away. The first thing I learned is that ALL police departments are full of assholes. There’s a city here in the KC metro area called Mission. They are notorious for writing chicken-shit tickets. In fact, someone told me they got charged for something for blowing over .035 for the blood-alcohol content. The legal limit is 0.08. This means they passed their own law that states you can’t swallow mouthwash without getting fined. Why? Is it to protect? No. It’s to rape your wallet. Fuck Mission PD!* Back to my trip. On my way home, I got pulled over by some Texas county police officer for (1) following to close to the car in front of me and (2) speeding. The first offense is complete bullshit, considering it was the tail end (no pun intended) of morning rush hour traffic. The speeding charge: 75 in a 70. Seriously?! There is a difference between the letter of the law and the spirit of the law. Apparently, police departments across the nation lost track of the SPIRIT of the law. The second thing I learned is that the dating scene is essentially the same in every city. That may seem counterintuitive when you consider demographics and what not, but hear me out. After talking to my cousin who lives in Dallas about dating in KC and arguing which city is better, the answer is clear: the quality of a dating scene is dependent on the quality of YOU. If you are anything like me, the dating scene is going to suck everywhere. If you’re anything like Channing Tatum, the dating scene will be awesome everywhere. In the end, every city is both a terrible and awesome place to live. It all depends on you on which one it’s going to be. You know what’s awesome no matter what? THIS WEEK’S ROUNDUP!

* Pretty sure that’s who NWA were referring to.

Since I’m coming back from there, let’s start this week with some news from Texas. They’re reconsidering sending prostitutes to prison. That’s right. The state that loves sending people to prison and killing them for jaywalking has a soft spot for whores…then again, don’t we all? Texas has a three-strike rule with prostitution: three misdemeanors and you go to prison. However, it looks like sex for money is in high demand, because the prisons are overflowing with prostitutes. Now, even politicians are claiming that prostitutes are not a threat, so release them. By saying they are not a threat, they’re basically saying, “Sex for money is a victimless crime.” That is NOT what they are saying, but it is. The ONLY reason why prostitution is illegal is because of BS morals that are based on a BS religion that derives from a BS fictitious novel. It protects society from NOTHING. In fact, I will argue that it HURTS society. I don’t have the stats to prove it, but I would bet the house that areas where prostitution is legal have a lower sex crime rate. Hey, politicians! Want to win the election in November? Here’s your platform: “Unlike Todd Akin, I’m anti-rape…legitimate or illegitimate. That’s why I will legalize prostitution. I’m Ty Fisher, and I approve this message.”

Another school shooting happened. This time in Maryland. No one died. With that said, here are the only two things you need to know: (1) the kid is a crazy asshole who should be eradicated from human civilization and (2) media sensationalism of these events are half to blame…his more than likely shitty parents are the other half of that equation. There it is! That sums up EVERY school shooting from here on out. Yes, life is that simple and predictable. We are not as unique as we like to think we are.

Only if she were the actual Sarah Palin. At least Serra Paylin has a discernible talent that benefits me. Guess who’s going to be my VP running mate! Fuck you, John McCain. I’M the maverick!

Dear, all Republican politicians: NEVER EVER EVER EVER EVER OPEN YOUR MOUTH WHEN ASKED ABOUT RAPE! Never. Republican U.S. Senate nominee Tom Smith likened rape to having a child out-of-wedlock. Here’s a quote from the above article when asked to respond to Todd Akin’s comment:

“What that congressman said I do not agree with at all,” Smith said. “He should have never said anything like that.”

“I lived something similar to that with my own family,” he went on to say. “She chose life and I commend her for that. She knew my views but fortunately for me … she chose the way I thought. Now don’t get me wrong. It wasn’t rape.”

Smith was then asked if his daughter’s unwed pregnancy and rape were similar. “No, no, no. Put yourself in a father’s position, yes, I mean it is similar,” he said.

Asked again to clarify his statement, Smith said he wasn’t comparing the two.“No, I didn’t not say that,” Smith said. “I said I went through a situation (with a daughter). It’s very, very difficult. But do I condone rape? Absolutely not. But do I propose life, yes I do. I’m pro-life, period.”

#SMH. He did a little damage control immediately after his comment, but Jesus, dude! How hard is it to NOT COMPARE RAPE TO ANYTHING OTHER THAN RAPE?!?!? This is indicative of how Republicans and conservatives think when it comes to social issues: like goddamn morons. When it comes to economics and the like, they’re awesome. Stick to that. Leave rape to the Democrats. Wait…

Due to a few bad apples, everyone else can’t have nice things. Hipsters won’t allow us to like our music. Lawyers and gold diggers won’t allow us to enjoy anything without a million warnings from the manufacturer. And evil World War II dictators won’t let us use the name Hitler for anything less than negative. Like this clothing store in India. This genius decided to name his brand new clothing store “Hitler.” The best part, the store owner claims he has no idea who Hitler is. Sounds legit. He claims the name came from his business partner’s grandfather’s nickname of Hitler since he was a strict man. The owner, Rajesh Shah, only knew Hitler as strict man. Biggest. Understatement. Ever. Assuming this is true,  Hitler is still a stupid name for the store even under that context. I wonder what Jon Taffer of Bar Rescue would say if he were sent to a business and this was the first thing he saw: 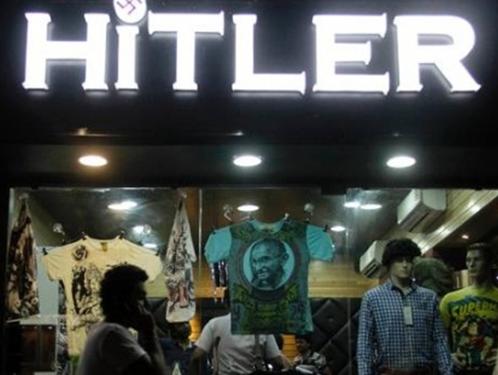 Yes, that’s a Gandhi shirt directly under a Hitler sign. The Superman shirt makes sense. Everyone knows Clark Kent was part of the Aryan Brotherhood. The swastika within the sign shows that Shah knows exactly who Hitler is. Shah would later confess he was aware of Hitler’s body of work, but the shop was not referring to that Hitler. Hitler is like Highlander: there can be only one. Sorry Indian guy, Hitler is why you can’t have nice things.

Ivy League students are the cream of the crop. The elite of the elite. Or in many cases, some rich kid that bought his way in. At any rate, they represent the top 1% in academia. Except for Harvard. Nearly half of more than 250 students in “Introduction to Congress” are under investigation for cheating. Essentially, a bunch of students either plagiarized answers or collaborated on a final take-home test, both of which are not okay. To start, why are Harvard students receiving take-home tests? This is the sort of thing junior colleges and lower tier universities do to ensure at least some people graduate. If you’re good enough to get into Harvard, you don’t need the luxury of a take-home test. Harvard students cheating on an introductory undergraduate course is indicative of either a) the state of education or b) nothing at all (i.e. this is the way it has always been). I’ll go with the latter. Why? The course was Introduction to Congress. Harvard and Yale are the breeding grounds of Congress members and Presidents. When you consider how shitty our government is, is it really surprising that they just cheated their way through courses such as “Introduction to Congress?” Also, this proves how worthless college coursework is. It’s never about what you know, it’s who you know. Someone who graduates from State College Law school with an impressive knowledge of law will end up as a public defender. A person who graduates from Harvard Law and is clueless about how the legal system works will get a lucrative job at a top law firm. If you’re a college student and reading this, take the following advice: pay more attention to internships and other forms of networking than to trivial coursework. Your future employer gives zero fucks about your GPA. The more you know.

I don’t do enough news about genitalia. Good news: pediatricians prefer circumcised penises. Wait…let me rephrase that. The American Academy of Pediatrics has concluded that the benefits of circumcision far outweigh any risks. Let’s be honest: penises are truly disgusting things. Whether or not you’re attracted to men, I think we can all agree on this. Circumcision is kind of like a makeover for penises. Still not pretty, but not as ugly. It’s like older women getting a facelift. The procedure doesn’t turn them into a hot 20-year-old, but it might make an ever so slight improvement. That’s right, circumcisions are facelifts for men…penislifts. Now, the article talks about the health/medical benefits of circumcision, but let’s not kid ourselves. The real question us men want an answer to is “Will it increase my chances of receiving a BJ?” I think we know the answer.

“Parent of the Week” goes to Nils Pickert. Pickert started wearing dresses…because his 5-year-old son enjoys wearing dresses. After he allowed his son to start wearing women’s clothing because the boy wanted to, Pickert realized that the reaction in his small town was less than positive (shocker). To boost the boy’s spirits, Nils decided to start wearing skirts when going out with his son. Here’s a pic of the two:

My dad calls me a fag when I wear a goddamn v-neck shirt. It’s the 21st century, folks. If you disapprove of this father’s actions, either kill yourself or hop into your Delorean and go back to the days of “Enchantment Under the Sea” dances. It’s hard for many of us to wrap our minds around the fact that a 5-year-old understands his urge to be more feminine. Chances are, the child is gay or may go on to be transgendered or maybe just like women’s clothes. Either way, who cares? By oppressing the boy’s natural inclinations, we end up making him believe he is wrong about everything he knows, which often times leads to depression and suicide. This kid will be beaming with confidence and self-esteem thanks to his father. On a side note: the two used to live in a larger town where no one though anything of the situation. That town: Berlin, Germany. Germany. It’s always Germany or Florida.

What To Look Forward To On Episode 107 of Soundtrack of the Week:

For more news and commentary that is as controversial as Todd Akin’s medical advice, listen to Soundtrack of the Week on www.soundtrackoftheweek.com, iTunes, and on your smartphone via Stitcher Radio (Twitter page at @SOTWpodcast). Also follow Ty on Twitter at @TySOTW. If you don’t, he’ll rape you…and it will be legit.