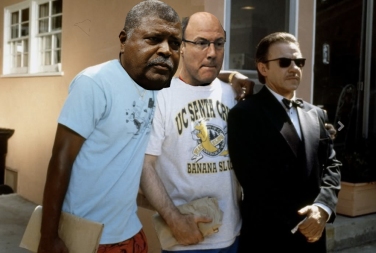 The Kansas City Chiefs made headlines again this year, and like all the other headlines this season, it wasn’t pretty. I’m of course talking about the Javon Belcher murder/suicide. Since this made national headlines, I’m assuming you know the story. If not, here you go. Per standard protocol, Twitter blew up, and in true nature of the Internet, people started attacking each other over comments made. Some people were offended by “callous” jokes. Others were disgusted by those who were offended. For approximately three hours, everybody* was a spokesperson for Suicide and Domestic Abuse hotlines. For about the duration of an NFL game, everyone was a model of good moral character. In other words, for a brief period of time everyone was on their high horse. People want to believe that their reactions on the Internet to a tragedy is what makes them good people. Conversely, they use that same barometer to measure how bad people really are. The irony lies in the fact that people who made “callous” jokes are the good ones. Why? Because they’re not full of shit about who they are. Most of those who went apeshit on Twitter are from KC. If this tragedy were to have happened to a Raiders linebacker in California, the tone would had been much more different. How much we care about an event is dependent on the geographical proximity. THAT is more offensive than a lame joke. I made a Belcher joke on Saturday because my stance on murder doesn’t change when it gets closer to my home. If Miles Burris of the Raiders would have committed a murder/suicide, KC Twitter folks would have made some “callous” jokes and gotten away with it. The context doesn’t change with my joke on Saturday. People in Kansas City know Burris just as well as they knew Belcher, I.e. not at all. For those of you who made a few offensive jokes on Twitter, I applaud you for being real. For those of you who had to make a big fucking deal out of those jokes, MOVE ON WITH YOUR MISERABLE LIFE! Did the jokes have a negative impact on your life? No? THEN SHUT THE FUCK UP! Oh wait, they did? THEN SEEK HELP! Unless you start dedicating your life to suicide/murder prevention, this tragedy means NOTHING to you, so stop acting like it. Christ! People are pussies on the Interwebz. If you’re not still grieving over the death of someone you never knew, enjoy THIS WEEK’S ROUNDUP!

* At least everyone in Kansas City

I’m sure you have seen this picture a thousand times on Facebook by now, but it’s worth mentioning again: 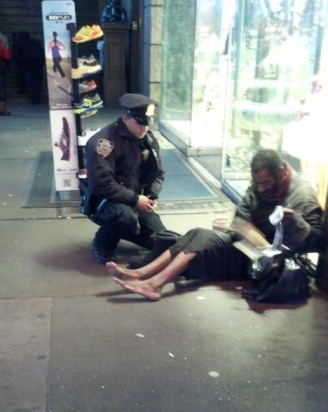 An NYPD officer, Larry DePrimo, is shown putting a brand new pair of boots and socks on a homeless man. After noticing the man’s blistered feet in the frigid temperatures, Officer DePrimo went into a nearby Sketchers store and bought the homeless man a $100 pair of boots. A nearby tourist saw the act of kindness and snapped a photo, which went viral. Again, this was an NYPD officer; the same police department that Occupy and many media outlets have tried desperately to demonize. Here’s the thing, folks: most cops are good people. Whether it’s the NYPD or some small town department, they are here to make sure we are all safe. We only hear about the mustached douches that are reliving their glory days from high school. And what about the clerk at the Sketchers store? He gave the officer half off the sticker price with his employee discount. Most people are decent human beings and many are above average on the kindness scale. If Officer DePrimo is single, he will be suffocating in an avalanche of pussy.

For the sake of preserving humanity and good people like Officer DePrimo, some places should probably be nuked: Iran, North Korea, Florida, the moon. I don’t know what’s up with that last location, but the government knows something we do not. The U.S. had plans to nuke the moon during the Cold War. In an attempt to not look weak compared to the Soviet Union’s progress in the arms race, military officials planned to send an atom bomb to the moon to the show the world that they too can fuck shit up. They ended up abandoning the mission in fear of a mishap that could result in the bomb detonating on Earth. I’m not a physicist, but shouldn’t they have been worried about the consequences if the mission were to have SUCCEEDED? It blows my mind that world leaders are more concerned with proving who has the bigger dick rather than working towards peace and happiness. If it isn’t about religion, then it’s about money and power. Both of those things won’t matter if we nuke each other; money will be useless during the apocalypse and religion isn’t real. I suggest going after Florida next time we need to prove our power. We’ll prove a point AND eliminate the contaminates of our gene pool. Sorry, Florida, but you guys suck.

Drug use can make you do terrible things such as rape, murder, and eating people’s faces. Prescription drugs are no different. A Parkinson’s disease patient won a lawsuit claiming the treatment drugs turned him into a gambling and gay sex addict. The French man was awarded 197,000 euros ($257,400) for damages. The court ruled that the drugs affected the pleasure neurotransmitter known as dopamine, which caused the man to seek pleasure in more extreme situations. Look, I’ve done my fair share of drugs, most of which affect the pleasure zones of the brain (e.g. Ecstasy), but never once did it lead to gay sex. In fact, I have never known a drug addict-and I know more than I should-that had gay sex who otherwise would not have. Actually, gay sex is one of the very few things a drug addict won’t participate in while high as a kite, unless he needs to suck some dick for more crack. This French guy wasn’t blowing dudes for his prescription drugs, so that scenario is null and void. Chances are, this guy had severe homosexual tendencies BEFORE he got Parkinson’s. These drugs probably just loosened him up…especially his asshole. My dopamine levels for sexual pleasure have been jacked thanks to Internet porn. Midget porn is no longer taboo for me. However, as soon as I see a penis* that is not accompanied by a vagina, I instantly hit alt+control+delete. The day I stop doing that is the day I go see my doctor for a Parkinson’s check.

It’s a good thing that Third World countries can’t access this article, because it would piss them off on so many levels. Plus-size mannequins are stirring up controversy. Here it is: 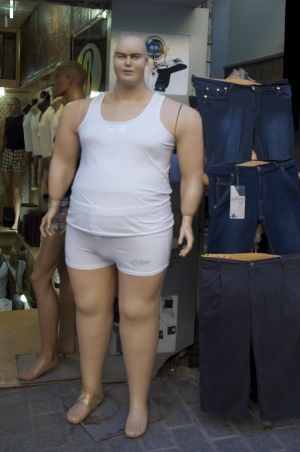 Many people are pleased that department stores are representing obese people other than just skinny people. Others find that it perpetuates obesity and symbolizes where we are headed as a culture. I’m siding with the latter. Approximately 99.999999% of obesity cases can be avoided. It’s comparable to smoking. Smoking is bad for your health, and there is no reason to start. Over-eating is also bad for your health, and there is also no reason to start. Yet, we feel the need to protect the feelings of fat people while comparing smokers to the Gestapo. With public bans, PSAs and anti-smoking organizations, smokers have been shamed into quitting. Clothing stores and the media not representing obese people did the same for those who are overweight. It shames them into adopting a healthier lifestyle. Simply having the need for plus-size mannequins-let alone complaining about them-is such a First World problem. While we’re here debating the topic, people in Africa are literally falling through the cracks. I bet they hate obese people more than smokers. Fat people < smokers…not by size, obviously.

Muslims are among the worst type of people to be in white countries…we’re kind of prejudiced towards them. Homosexuals are the worst type of person to be amongst Muslims…next to White Devil. So a gay mosque opening in France is probably a bad idea. Europe’s first gay-friendly mosque is scheduled to open soon in Paris. This may bring world peace considering that white people and Muslims will come together for one common goal: to burn down a mosque. Now is not a good time to get this progressive with Islam. Hell, Christians and Catholics can’t even accept homosexuality, and they are far more tolerant (collectively) than Muslims in that area. I understand that danger goes hand-in-hand with progressive movements (see: pre-Civil Rights Act of 1964 America), but maybe we should take baby steps here. For example, let’s work on women’s right and not stoning people to death for drawing Muhammad before moving onto more contemporary issues. In other words, let’s get out of the Middle Ages, THEN move to gay rights.

What To Look Forward To On “Episode 119: Burn Up The Radio” of Soundtrack of the Week:

For more news and commentary that can get you stoned* in some cultures, listen to Soundtrack of the Week on www.soundtrackoftheweek.com, iTunes, and on your smartphone via Stitcher Radio (Twitter page at @SOTWpodcast). Also follow Ty on Twitter at @TySOTW. If you don’t, we’ll tag your home as a gay mosque on FourSquare and Yelp.

* “Rocks thrown at you” stoned, NOT “get you high” stoned