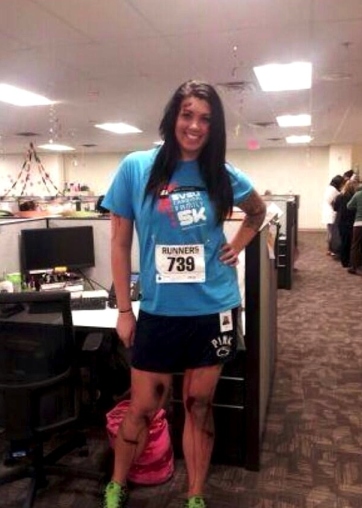 On Soundtrack of the Week, you may have heard me refer to the Internet as “The Great Democratizer” about a couple thousand times over the past four years. Meaning, the global community democratically (and somewhat organically) decides when something morally or socially unacceptable occurs. When we come upon this common ground, we expose and shame the person/group/entity/etc until justice has been served. Sometimes, this is done at the macro level, as we saw with Arab Spring. Other times, Internet vigilante justice occurs at the micro level, e.g. the lady who gave out letters instead of candy to fat kids on Halloween. Before the Internet, the assholes of the world got away with being a piece of shit. Not anymore.

However, vigilante justice comes at a cost. That cost comes in the form of overly sensitive, easily offended people shouting “Witch!” over nothing and burning innocent people at the stake. This is certainly the case for a young woman who wore a Boston Marathon bombing victim costume and was crucified by the Internet. Click the link for details, but here’s a brief summary of what happened:

First of all, if you are offended by ANYTHING (let alone a fucking costume), that’s on YOU. Being offended is a sign of emotional weakness in addition to extreme narcissism. The fact that a costume negatively affected your emotions tells me that you are unable to determine blatantly obvious intent and differentiate the meaningful from the meaningless. YOU seek out negativity in things­–despite any context–so that YOU can make it about YOU. This is not about the victims of the Boston bombing. This is about YOU telling the world that YOU care about all human life and that YOU are morally superior.

The fact is, when this young woman was wearing the costume, no one around her cared. At most, someone might have found it questionable and then went about their day. However, the vocal minority on the Internet loves to make mountains out of molehills, and now this girl has no job. If you believe that losing a job and being publicly humiliated is a suitable punishment for a questionable costume, I suggest you reevaluate your priorities and your life.

I still believe that the Internet has generated more good than evil. Maryville and Steubenville rape victims can attest to that. With that said, let’s focus on people who are a REAL problem. Let’s get outraged about things that have a REAL negative effect on society. And for the love of god, quit being such a whiny bitch and leave innocent people alone!

One thought on “Vigilante Justice Gone Out Of Control”