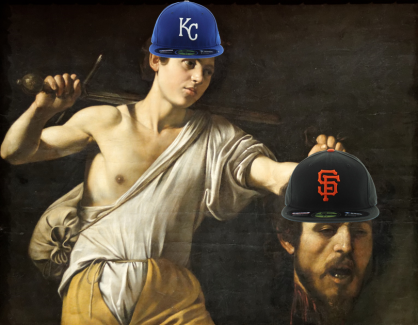 We all know the story of David vs. Goliath: a tale where the underdog defeats the giant. Its message is anyone can overcome the odds, regardless of the opponent in your way. The unlikely heroes, the Kansas City Royals, are literally facing Giants. It’s a story that is making media producers have the biggest hard-on.

Meant to inspire, tales like David vs. Goliath­—often times—do not have real world applications…especially in sports. The big guy—whether it’s in business, a street fight or sports—usually wins. It’s a shitty fact of life.

Knowing this, I do not expect the Royals to win the World Series. This is blasphemous as a life-long fan and Kansas City resident. Some call me a pessimist. Others call me asshole, which is somewhat accurate. However, I call myself a realist.

Vegas has Kansas City winning it all, which is far more comforting than the entire world rooting for the Royals. Odds-makers know what they’re talking about, except for the fact that they have been wrong about every underdog matchup this postseason. With that said, Vegas always comes on top in the long-term. If they didn’t, it wouldn’t exist. Take that as you will.

Despite both teams being a Wild Card team, the only true Wild Card team are the Royals: a young team that was never supposed to make it this far, let alone at 8-0. San Francisco, although a Wild Card team, isn’t your typical play-in team. They’ve been here twice in the last four years and won them both. This is a mismatch by all definitions.

Everyone outside of San Francisco (and even some in San Francisco) wants the Royals to beat the Giants. Not only will the story be insanely inspirational, but them losing will have a reverse effect.

A Royals loss is a loss to everyone who’s not an alpha male or female.

A Royals loss is a loss to everyone who didn’t grow up privileged.

A Royals loss is a loss to everyone who has to overcome great odds.

Reality sucks, and in the real world, the underdog typically falls short. That’s why the world is rooting for the Royals. It’s more than hope for a sport whose high salaries for big market teams results in insane disparity. People across the globe are identifying with the Royals in their own personal way. For them to lose will bring us back to the reality that we so desperately want to change. To say a Giants win will be anticlimactic is an understatement.

As of press time, the series is tied 1-1, with both teams destroying their opponent in their respective win. I have all the faith in the world that the Royals can win it all. If the Giants lose, their fans can easily brush it off. If the Royals lose, it will hurt just as much as the win will bring joy and celebration.

Reality is a bummer. It’s time to slay the head of the giant!