The Iowa Caucus is an event that we arbitrarily deemed important in the presidential election process. A bunch of white people in the Midwest get to shape the narrative of the presidential race. It’s dumb.

With that said, let’s see what information we can glean from this bullshit vote.

There are no black people in Iowa

Okay, so there are probably several, but the Iowa Caucus results suggest there’s maybe like 100 or so. Seriously though, there are no black Republicans in Iowa. Exactly ZERO percent of Republican voters were black, 2 percent Hispanic/Latino, 1 percent “other” and 97 percent white. None of the minority votes mattered or they didn’t vote because all GOP candidates received 0 percent of the minority vote, as they should.

Not even the minority votes among Democrats mean a damn thing. Of Democrat voters, 3 percent were black, 4 percent Hispanic/Latino and 2 percent “other.” Again, both Sanders and Clinton received exactly 0 percent of their votes.

Of the Democrats ages 17-29, 84 percent voted for Bernie Sanders. Considering most of these people weren’t alive when Bill Clinton was elected to his first term, the Clinton name doesn’t mean shit to them. Whether or not that is factor is up to you to decide. More than 60 percent of Democrat voters ages 30-39 voted for Sanders as well. 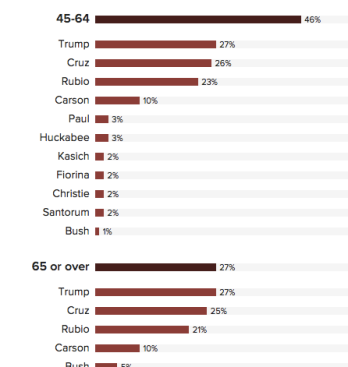 As a Millennial myself, what I do know is that this age group is all about socialism. Older people who do not find socialism as appealing also belong to the generations that didn’t experience significant income inequality, unlivable wages and crippling student loan debt. Shocker.

On the other side of the spectrum we have old Republicans. A quarter of Republicans ages 45 and over voted for Donald Trump. That means one in four older Republicans in Iowa believes that Trump should be president. That is an astounding amount of people. At one point, Trump led in that age demographic. He still took second.

I’ll get a lot of shit for labeling this group as “dumb,” but I’m willing to take the heat for it. GOP voters with an education level of high school or less voted for Trump more than anyone, 32 percent to be exact. That’s enough to win the demographic. Yes, I know. Just because you didn’t go to college doesn’t mean you’re dumb.

But here’s my argument suggesting that is exactly what that means.

There is a negative correlation with votes for Trump and level of education. GOP voters with some college or an associates degree voted for Trump at 26 percent, followed by 22 percent of college graduates and 20 percent of postgraduate study voters. The numbers back up my original claim. Go to college (and if Sanders wins, it’ll be free!!!).

Sanders was beaten by women

First of all, claiming that minorities were just voting for the same team regardless of policy is just as dumb as the Iowa Caucus. It’s a dumb argument considering you are comparing two parties, not two people within the same party. The GOP has a negative history with minorities. THAT is why Obama won. With that said, women voting for Clinton in the Iowa Caucus is not the same.

However, if Hillary Clinton were neither a female nor a Clinton, would she get the same vote? If Clinton’s platform and Sanders’ platform were presented as Politician A and Politician B, would Clinton’s platform receive the same percentage of the female vote? My guess is “no,” and that’s mostly because I don’t trust most people – Republican or Democrat, male or female – to make an educated and informed decision.

Did I mention this entire thing is dumb?

Sanders and Clinton tied. I don’t care what the official results claim. A vote of 49.9 percent to 49.6 percent is a goddamn tie. It’s almost like this is a coin toss.

Apparently, when there is a tie, delegates are chosen by a coin flip. The same process used to determine which team receives the kickoff in a football game is also utilized for presidential races. ‘MURICA!

NPR is reporting that the coin flips aren’t exactly as significant as other media outlets have claimed. To prove this, NPR tried to describe how the caucus works. It reads like Sanskrit. In other words, instead of counting how many votes each person received, there is a labyrinth of a process that David Bowie should reign over.

There you have it. Are you excited for November yet?