Waiting in line, I ran out of Candy Crash lives, read through the day’s timeline on Twitter and could have watched a feature-length movie on Netflix if I wanted to. No, I wasn’t at the DMV or first in line for the new iPhone. I was trying to vote for the presidential primaries.

When I walked up to the church to vote, the line ended outside and went through the hall that led to the gymnasium where the line snaked throughout the hardwood floor. There were about 150 people waiting to vote. The line wasn’t moving.

So many people in line, nobody actually voting

There was no one seated at the tables to vote. I pulled out my phone to time how long it took people to get a ballot once they were called from the front of the line to go through the verification process: approximately three minutes, sometimes more. And only three people were slothfully verifying IDs.

One lady in line said that someone who just voted claimed to have waited for two hours. Another man told me directly it took him an hour and a half. It got to the point where bottles of water were being handed out.

This is extremely dangerous to the process, and I’ll tell you why.

For the past few decades, voter turnout has been less than ideal, especially among young voters. According to Pew Research, U.S. voter turnout is the fourth worst among the 34 most developed countries. And the U.S. Census reveals that the younger the demographic, the less they vote. In the fast-paced 21st century, ain’t nobody got time to wait in line for two hours. Especially for something that statistically they are disincentivized to do in the first place.

As a nation, we are desperately trying to convince people to vote. However, when someone grudgingly shows up to the polling station only to find out it’s a 1+ hour wait, do you think they’re going to stick around? How about the parent who has to pick up the kids from daycare? How about people who have shit to do? 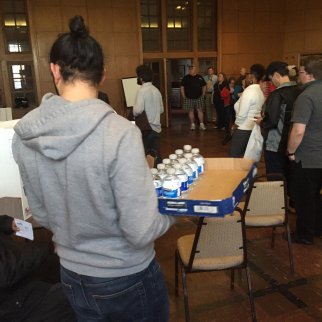 In Missouri, the primary election was extremely close for both parties. Trump beat Cruz by 0.2 percent and Clinton beat Sanders by the exact same margin. In terms of number of votes, Trump won by less than 2,000 and Clinton by about 1,500. That’s close enough to ask the following question: How many people turned around at the polling stations?

This may have something to do with black voters, who polls indicate are not huge fans of Sanders. However, parts of KC have been gentrified, including the area I live in (obviously, since I’m a young, white journalist). Sanders has a commanding hold of voters under the age of 40, according to the Iowa caucus.

The area I live in is full of young, white, uber-liberal voters, i.e. Sanders supporters. Another precinct reporting to have two-hour waits is also known for its lily-white, young liberals. In fact, Millennials are flocking to the city rather than the suburbs or rural areas, i.e. heavily populated areas; areas that are more likely to be affected by long waits at the voting booth. How many other polling stations had long waits? How many voters turned around and said, “Fuck it. I have shit to do.”?

Here’s an interesting response I received about this issue:

@TySOTW wouldn’t it just be equal damage to all candidates? Are you implying candidate A’s supporters would wait longer than candidate B?

The answer to the first question is “Not necessarily.” Areas affected by long waits tend to be in densely populated areas, rather than rural areas. As mentioned earlier, young Millennials are flocking to the cities, not the suburbs. In other words, young liberals are mostly affected as opposed to the older voters in the suburbs and rural areas.

With that said, the answer to his second question is “Yes.” There are not a lot of Trump supporters in the precincts that I know had long waits. They live in the suburbs and especially the rural areas, where lines are relatively short. In conclusion, Sanders voters waited significantly longer than Trump voters in Jackson County.

It’s entirely possible that my “wait” theory has no significant impact on the overall results. But considering the turnout issue we have and the extremely close race in Missouri, we better start eliminating all issues with the voting process, large and small.