U.S. News & World Report recently released its 2016 Best High School rankings, which raises two questions: 1) What is considered a “public” school and 2) Why are we ranking public schools if they are all receiving the same funding?

The answer to the second question is obvious, so let’s begin with the first question:

What is considered a “public” school?

Based on the results of the report, U.S. News and World Report is using the broadest definition. Essentially, any school that receives government funding as opposed to tuition, which is the case for private schools. This includes charter and magnet schools.

In fact, the top 25 high schools are all charter or magnet schools or otherwise only accept certain students. Actually, the first school to appear on the list that does not require a rigorous application process is Canyon Crest Academy which is ranked #73. In other words, your standard local high school probably does not crack the top 500.

Magnet schools, charter schools or any other “public” school that only lets in certain kids are really just private schools for poor kids. More specifically, super smart poor kids. Neither the schools nor the students are in anyway representative of the public school system and should not be included in these rankings.

All of the top schools accept only kids who are already on a straight trajectory towards success, so it’s no wonder the top 17 have a 100.0 college readiness rating with the 25th ranked school at 97.5.

This pretty much answers the second question:

Why are we ranking public schools if they are all receiving the same funding?

Because they’re not and that’s not the only inequality that determines the effectiveness of a public high school.

Canyon Crest Academy, the first genuinely public school* to appear on the list, is a great example. It is part of the San Dieguito Union High School District, which includes the cities of Encinitas, Solana Beach and Del Mar in California. A quick look at the demographics in those cities reveals…well…nothing surprising.

Perhaps there is a positive correlation with household income and efficacy of the public school system. This isn’t a revelation. Low income districts have been widely known for underperforming schools. Conversely, schools in more affluent areas have a higher rate of success.

Many factors are involved here. For example, low income students face more hardships that can affect schoolwork. Family structures and emphasis on educations are not as strong as in more affluent families. These are all independent of the schools. Yet, these factors directly and indirectly affect test scores and academic performance.

Regardless of personal factors, an argument can be made that the schools themselves are ill-equipped to churn out educated and prepared students. There is evidence that low income schools are getting less funding than other schools in the state and nation. This U.S. Department of Education report reveals that more than 40 percent of low-income schools do not get their fair share of state and federal funding.

Even more starting is a more recent report that discovered the majority of students in public schools are in poverty. The majority. This can be interpreted several ways: 1) Widening socioeconomic, i.e rich get richer, poor get poorer 2) More people with financial means are putting children in private schools 3) Everything is going to shit, fuck it all.

The Republicans have not been any help either. Obama could not get them to get behind funding all children to go to pre-school. Seriously, that happened. Raising taxes on tobacco products was considered out of line for them. As a smoker, even I can get behind paying a dollar more for cigarettes if it means pre-school for low-income children.

To be fair, the GOP recently passed legislation that gives low-income families vouchers for private school tuition. Take this to the national level, and we are on to something.

Locally (Kansas City), the problem is evident. In 2011, the Kansas City School District lost its accreditation. Kansas City’s median household income was $45,376 (more than $8,000 below national average) in 2014 with a poverty rate more than 19 percent. Poverty rate for the U.S. was 14.8 percent.

Even affluent neighborhoods in Kansas City are not doing well. Leawood is known around KC as the neighborhood where well-to-do people live. With a median household income of $133,702 and a poverty rate of 3.3 percent, it is easy to see why. Leawood falls within the Blue Valley School District. Here’s the list of the top ten public schools in Kansas: 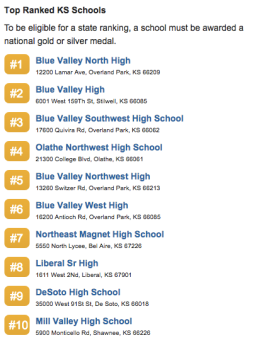 Meanwhile, I graduated from Shawnee Mission North in Mission, Kan. The city of Mission has a median household income of $51,080, just slightly below national average. I can attest, it was a dead average city in every way. The high school? Didn’t even rank…within the state of Kansas, let alone nationally. Shawnee Mission North has a College Readiness Index of 15.7, which is not surprising since it took me seven years to get a journalism degree.

*According to its website, all eligible students in the district will be offered enrollment in their first choice high school, eliminating the exclusionary processes used in nearly all of the schools ranked above Canyon Crest Academy.

U.S. News & World Report also has a separate list for top charter schools and top magnet schools, so there’s no reason to include them in the public school category. Unless they knew the sobering effects of not including them.

Remember the city of Leawood and the Blue Valley School District (dominated the Kansas charts)? The #1 public school in Kansas, which is in an affluent neighborhood, has  a College Readiness Index of 49.4. That means less than half of the kids who qualify for affluenza who attend a public school are ready for college.

If you exclude the charter and magnet schools from this list, you are left with a national public school system of idiots. Canyon Crest Academy, the first truly public school on the list, had an 86.6 readiness index. That would be the #1 school.

Bottom line: These rankings are completely full of shit and are analogous to comparing Division I basketball teams to Division II and III teams in the same broad stroke. Take away the “apples and oranges” scenario, and we have a major problem on our hands.