Social media is responsible for the deaths of thousands – maybe millions – of kittens. Let me explain.

Among the many flaws of the internet, social media is perhaps the greatest. Despite turning human civilization into a global community from the more national, regional and localized communities we’re used to, social media has also managed to tear apart individual lives with no mercy, regrets, discrimination or sympathy. Kind of like nature.

Before the internet, access to millions – even billions – of people were limited to a select few. Essentially, only world leaders, celebrities and the media had such access. Those people were fully aware of the power they held by having access to a mass audience and therefore instituted rules and ethics to live by, especially the press. One tiny mistake in a story about an average person can ruin their lives.

Today, your typical village idiot has that same access, and in some ways, even more. However, the average person does not understand the power they hold by being able to reach a mass audience. It’s similar to a gorilla with a pet kitten, like Koko. Unlike Koko, this gorilla does not understand its own strength and consistently kills its pet kittens by accident. The gorilla means well, but just can’t grasp the concept of its strength relative to the kittens.

For decades, journalists have been trained through education and experience on how to deal with the power they wield. To start, they should report the facts and only the facts. Second, there is a two-source system and other checks and balances to ensure the facts are indeed facts. Third, identities of certain people are protected for certain reasons. Fourth, not everything is reported because not everything is newsworthy. The list goes on and on.

These rules and ethics are in place to ensure the public is protected from misinformation and the public itself is protected. A misinformed society is a crumbling society. As far as personal protection, rules and ethics prevent journalists from publishing content that could ruin the lives and reputations of innocent people. Journalism is a powerful industry. It’s why we have libel and slander laws.

Now, a high school dropout with no sense of morals has that same power. As a result, lies, misinformation, pseudo-facts and propaganda are spreading like wildfire and the flames are swallowing up the gullible and uneducated.

Harm being committed is not always malicious or intended. Sometimes simply posting a picture of someone without their consent can have unintended consequences. People forget that the picture can reach millions of people in a matter of minutes or seconds. Before the internet, you would have to pay the New York Times or a national television network for ad space to get that kind of exposure for a picture. Even then, media outlets would likely decline the ad money due to rules and ethics. On the surface, the picture doesn’t need to be “damaging” in order to do damage. 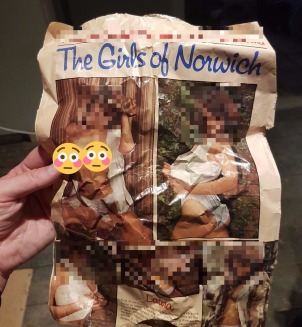 Original tweet did not blur the images or texts. However, they were gracious enough to cover boobs with emojis.

Not this, and I will tell you why.

So already, there is some financial incentive to do a single shoot. But is the quick cash worth the possibility of someone you know discovering the magazine? Back in the ‘70s, the odds were more in your favor. 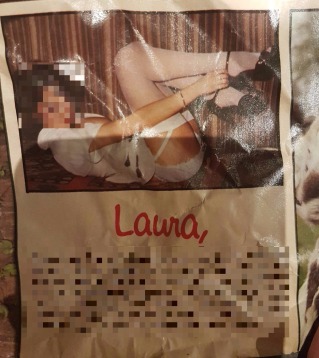 The original tweet did not blur the images or text.

Despite less content in the ‘70s, it was far less likely for someone you know to run across your short-lived experience. People could not exactly scroll through an endless stream of images and videos at no charge. They only saw what they purchased.

Then the internet happened.

Then a complete stranger finds the magazine, finds the page and then feels the need to share to the world their find. A complete stranger has decided for Laura, without her consent, that her little secret needs to be exposed. Laura, possibly a grandmother by now, has been forced to relive her past and possibly explain it to those around her because a complete stranger with a Twitter account did not bother to think about the consequences of their actions. The person with a Twitter account does not consider the fact that the person in that porn magazine page was and still is a human being, not some still image drawing.

It is entirely possible that Laura does not care about any of this. Everyone Laura knows can see that magazine and Laura will be fine with it. Yes, that is possible. The complete opposite is also possible. The person with the Twitter account did not bother to find out and took it up herself to decide for Laura what was going to happen. After all, Laura made a decision 40 years ago and has to live with that decision. That was what I was told.

The gorilla has snapped the kitten’s neck but was only trying to love it. Despite the intent, the kitten is still dead. Metaphorical kittens are dying every day because of social media. When the average person didn’t have access to the masses, far fewer kittens were killed.