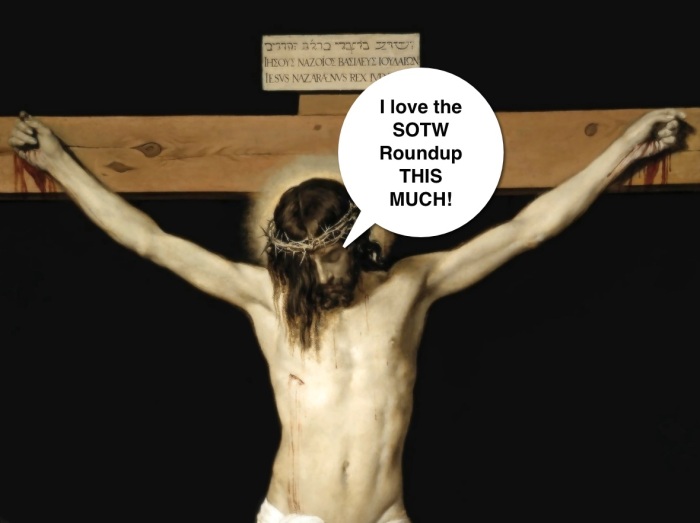 Easter is this Sunday and comes shortly after the resurrection of the SOTW Roundup. This may or may not be a coincidence. Like Jesus and the Bible, that’s open to interpretation and no matter what you choose to believe, you are both completely correct and completely wrong. Easter is a waste of a holiday. It falls on a Sunday, meaning no days off work. Today (the day this is published) is Good Friday. Many Western governments recognize this as a legal holiday. Even though this country was founded on Christian beliefs, the U.S. is not one of those countries. Jesus can’t get in the way of making money, goddammit! The only reason why we get Christmas off is because it generates a shitload of money. On Episode 176: Holiday Sin (Part II), we discussed potential new legal holidays for the U.S. since we have among the least amount of holidays for First World countries. After President’s Day (which is dumb as hell), there’s a two-month gap until the next holiday, Memorial Day. Americans love the shit out of Jesus, so why not throw in Good Friday? WWJD? Technically, he didn’t work that Friday, so why do we? With that said, drop your work, nail yourself to a cross (keep one hand free to scroll down…actually, if you’re nailing yourself to a cross, you kinda have to) and enjoy THIS WEEK’S ROUNDUP!

As foot soldiers of the tranny revolution­—correction: transgender revolution—SOTW abhors those who are transphobic. It’s a good thing Logo TV is taking a stand…on its own show? Who’s the transphobe? RuPauls “Drag Race” is to be censored for transphobic slurs. Wait. What? Apparently, there’s a segment on the show where RuPaul gives the contestants a video message. The name of the segment: “You’ve Got She-Mail.” Heh. Yes, because there’s no one more transphobic than a bunch of drag queens. That’s like telling rappers to quit using the N-word because they’re racists. Same team! Then again, when it comes to offending people, context and intent are out the door. People who get offended seek it out. Actual impact and effect are insignificant. A show about drag queens on a gay network can’t use the word “shemale.” We are all idiots.

As my co-host on Soundtrack of the Week has learned, there are some things you cannot say on Twitter before the FBI shows up at your workplace. His tweet was a lot less controversial than this dumb bitch’s tweet. If you’re too lazy to click a link, here’s a screenshot of the tweet that got a 14-year-old Dutch in trouble:

It’s 2014 and some people still haven’t figured out the Internet. Hell, Jay’s tweet was about blowing up KCP&L for the power shutting off during his favorite show. However, his tweet wasn’t directed at them and was a bit more subtle than that. Tweeting directly to an airline about doing something really big is no different than strapping an alarm clock to your chest at an airport. Dumb. American Airlines social media employee took care of business. Too bad US Airways social media employee didn’t have a similar week: EXTREMELY NSFW PICTURE

We all know that rich people and lobbyists rule the law of the land. However, you can’t prove it with empirical evidence…until now! Princeton University released research which reveals that American policies are controlled by “economic elites and organized groups representing business interests.” The study goes on to say that “mass-based interest groups and average citizens have little or no independent influence.” Ironically, Princeton—a university that breeds corporate lobbyists from the economic elite—is the university that discovered this. Now science backs up the claim that government is corrupt. You and I don’t matter. It’s science…literally. Historically, revelations like this spur revolutions, but we’re all so dumb and content that this research will fly under the radar while politicians and the rich line their pockets at our expense, both literally and figuratively. So go ahead and eat your Double Down sandwich and gorge your eyes and numb brain on the new season of American Idol. Ignorance is bliss, I suppose.

Tax Day was on Tuesday. Did you file your taxes? Did you pay your taxes if you’re in that bracket or somehow got screwed by the government? I actually paid all my state taxes this year, so I’m counting on the police to back the fuck off when it comes to petty shit. At any rate, doing your taxes is hard shit (if you don’t use TurboTax). Hell, even rich douchebag, former Secretary of Defense Donald Rumsfeld thinks so: 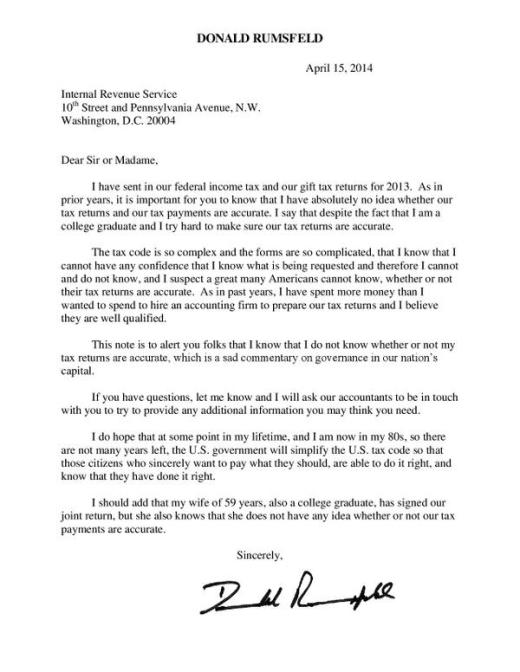 Two things: 1) Rumsfeld is a rich guy. Can he not pay someone to do his taxes? Of course he can, and probably did. He’s just a grumpy old man who wants to bitch about something that really is a problem, but not for him. 2) This tactic looks eerily similar to something I have seen on To Catch A Predator. You know, the one where the guy writes a letter explaining how he’s just going to counsel the girl and leaves it in his car in case it’s not really a horny 12-year-old girl. That way, when the cops corner him he can say, “You see?!” This is Rumsfeld’s tax version of “I totally wasn’t going to molest that girl. SEE?” letter. Nice try. 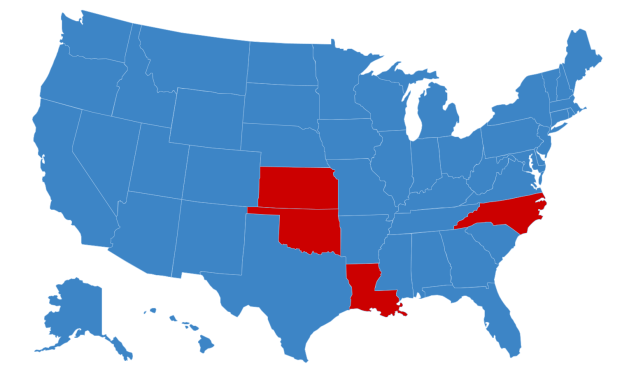 Remember those jokes about literally signing your soul away because no one reads the Terms & Conditions when signing up for anything? Well, you might want to start doing that. Liking something on Facebook can disable you from suing a company. In an unprecedented move, fucking huge corporation General Mills has added the following in their Legal Terms:

In exchange for the benefits, discounts, content, features, services, or other offerings that you receive or have access to by using our websites, joining our sites as a member, joining our online community, subscribing to our email newsletters, downloading or printing a digital coupon, entering a sweepstakes or contest, redeeming a promotional offer, or otherwise participating in any other General Mills offering, you are agreeing to these terms.

In other words, simply liking them on Facebook or accepting a fucking coupon legally binds you to the Legal Terms, which include settling disputes ONLY through arbitration or informal negotiation via email. This means you can’t sue. Evil, manipulative, and a PR nightmare? Yup! If General Mills is doing this and getting away with it, you can be damn sure that every corporation from here on out is going to adopt this. My advice: Don’t like shit!

For more news and commentary supported by our Lord and Savior Jesus Christ, listen to Soundtrack of the Week on www.soundtrackoftheweek.com, iTunes, and on your smartphone via Stitcher Radio (Twitter page at @SOTWpodcast). Also follow Ty on Twitter at @TySOTW. There are no Terms & Conditions that’ll prevent you to sue…although, that should probably be looked into considering the content.