Editor’s note: Since published, many on the “alt-right” have referenced this article to support their ideology, including anti-Black Lives Matter sentiments. The intent of this article was to protect the livelihood and reputation of two innocent college students and to condemn the negligent actions of a so-called journalist. The author of the article never intended to put a black mark on the Black Lives Matter movement. Rather, he wanted everyone to know what one mistake can do to people’s lives and an entire movement. Mr. Fisher stands behind the Black Lives Matter movement and condemns the alt-right. 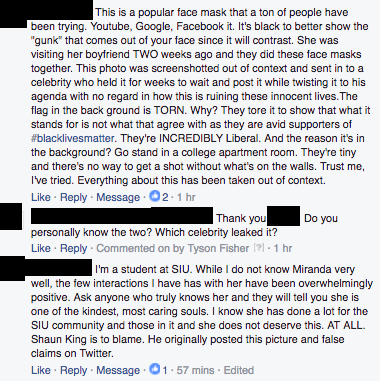 This is not the first time I have written about the power of public shaming. Unfortunately, it probably will not be the last. Social Justice Warriors (SJWs) and pseudo-journalists love to publicly shame private citizens to push whatever agenda. Sometimes they get it wrong, potentially ruining an innocent person’s life. Shaun King is the latest “journalist” who got it wrong.

White students @ Southern Illinois University (@SIUC) decided to put on blackface and pose in front of a Confederate Flag to celebrate Trump pic.twitter.com/OEP2yEW3So

Per usual, the backlash and hate was immediate and widespread. However, some people were quick to point out a detail that is anything but minor:

@ShaunKing where is the text explaining what they're doing? Bc I look that way when I do a charcoal face mask….

@ShaunKing @SIUC Isn't that a facemask? You know for cleaning out for your pores?

What those two college students are wearing is what’s known as a charcoal mask. These facial masks are used to remove blackheads. I know. Phrasing and color of the masks is unfortunate, but charcoal is black and blackheads are called blackheads. Very unfortunate.

Take another look at the original picture. The explanation Ms. Fair has given is consistent with the image. That flag is in fact ripped in half. Still not convinced?

In his Facebook profile (since taken down), Emery identified himself as a Liberal Democrat, which is not consistent with King’s claim of celebrating a Trump election victory. Here’s a screenshot of his last post (identifying info was blacked out as I obtained this before everyone already knew who he is):

When you do some actual research, the evidence suggests that these are two progressive, liberal college students who were cleansing their face. The placement of the torn Confederate flag is ill-advised (at best), but you have to consider that they never thought this picture would be seen outside their group of friends (who have – GASP! – context), let alone millions of SJWs.

It gets worse. A large number of people have been tweeting at Ms. Fair’s college, demanding they expel her. In fact, the university made a statement that one can only assume is in response to this whole fiasco:

Just look at those comments. The witch hunt is based on information they received from a “journalist” who clearly did absolutely no research to make sure the information he was distributing was factual.

Is it possible that I’m wrong? Is it possible that Ms. Fair’s explanation is to hide a more sinister intent of the picture? Yeah, it’s possible. However, based on the evidence available, it is more likely that Mr. King is wrong. But that’s exactly the point. There is not enough evidence for any responsible journalist to post that picture in any context.

Public shaming and social media have been a powerful combination over the past several years. It’s like a weapon of mass destruction: Intended to wipe out evil, but is likely to take out just as many innocent people in the process. In this case, everyone with an internet connection has the keys to the launch codes. This is the result.

Even if this story goes viral, the damage has been done. Tomorrow morning, you and I will wake up and probably not even remember this happening. For the people who are erroneously shamed, they have to live with the consequences of posts like these:

@ShaunKing I saw that the male student goes to college here in Ohio, so I am checking the school's code of conduct to report him.

Hey @SIUC are you going to expel Miranda Fair and Joseph Emery or what?

Joseph emery & Miranda fair want the world to know they are ignorant racists. I will help let the world know who you are&that this is not ok https://t.co/fDU1gj4TNT

NOTE: Several people, including myself, have pointed out to King his possible error in judgment. As of 4:30 p.m. CST, Thursday, Nov. 10, the Twitter post is still up.