Since we were young, we have been told there are two keys to success: work hard and apply yourself. Anyone can be an astronaut/actor/lawyer/etc. if you just apply yourself. This may be true, but what our parents didn’t tell us was hard work and grit was just a fraction of the “success pie.”

We all know talented people who never made it. Conversely, we all know people who are marginally talented (at best) that somehow carved out a successful career for themselves. Why do some fall through the cracks while others (seemingly) undeservedly make it? I’ve asked myself this question and analyzed (perhaps overanalyzed) the reasons why, and it comes down to one major factor:

Take a look at the successful people around you.  What was their family background? What about those that “failed?” Do you see a common theme? I did. I found a positive correlation with socioeconomic status and success. Someone who came from a working class family was far less likely to succeed than his or her upper middle class counterpart.

But perhaps this was all confirmation bias on my end. Perhaps this was me trying to project my own failure on external forces that were beyond my own control to justify my own lack of success. There was only one way to find out, and that’s by way of research. And what better way to find such a correlation than by interviewing a bunch of successful people and tapping into their background.

This is not class warfare…it’s math. – Barack Obama

I certainly never had the clout to do this, but one man did: Marc Maron. Maron has one of the most popular podcasts in the world, and it’s because of his in-depth, long-form interviews with celebrities. They go beyond the typical press junket shenanigans. Maron dives into their childhood, which often reveals their socioeconomic status growing up. BINGO! I found my source for data.

My hypothesis is that race, gender and other such factors are no longer as indicative of success as they used to be. Today, the ever-widening socioeconomic gap seems to be the controlling factor. A black female from an upper middle class background is more likely to succeed than a poor, white male. By analyzing a wealth of data from Marc Maron’s WTF podcast, I could prove (or disprove) this theory.

It’s pretty simple: I listen to the interview, wait for the interviewee to reveal family background, and I determine socioeconomic status. I give them the following ranking:

Each person can gain an extra point for other factors not related to talent/hard work/etc. Such factors include location and family in the business. For example, someone who grew up in Los Angeles or New York City gained a point. Considering the interviewees worked in show business, living in close proximity to the business is important; it eliminates the financial burden and uncertainty of moving to one of these cities from – say – Kansas City or Baton Rouge.

In other industries – medical, financial, insurance, etc. – location is not as nearly as important. Someone can live their entire lives in the Midwest, including college and internships, and become a doctor or lawyer. Living in Los Angeles or New York City does not increase one’s chances of success in most industries. Since the opposite holds true for the entertainment industry, I would be remiss to ignore that factor.

Family connections offer an obvious advantage of success independent of talent and hard work. That is not to say successful people with connections did not work hard, mind you.

Each interviewee can only gain one point, so someone who grew up in L.A. with family connections only gained one point, not two.

Is this scientific research? Not by a long shot. I tried to remain as objective and reasonable with my analysis as possible. To keep myself honest, I kept a spreadsheet that includes the interviewee name, episode number, detailed explanation of rank, ranking, and race.  My interpretations are completely open to “peer review,” i.e. you can look at it and call me out on any inconsistencies or falsehoods.

Where justice is denied, where poverty is enforced, where ignorance prevails, and where any one class is made to feel that society is an organized conspiracy to oppress, rob and degrade them, neither persons nor property will be safe. ― Frederick Douglass

Again, socioeconomic status was determined by my own analysis. I’m not an economist or otherwise qualified to say for certainty which category someone falls in. At no point do I suggest otherwise. As pointed out above, you can look at the spreadsheet if you question any ranking given to an interviewee.

Also, Maron interviews mostly those who have succeeded in the entertainment business: actors, comedians, musicians, etc. With that said, the data collected is by no means “random.” Not only are these mostly entertainers, but these are also entertainers that agreed to be interviewed by Marc Maron on his podcast. Scientific research involves a random sample, and this is anything but.

My point is the following: I have a theory and decided that Marc Maron’s WTF podcast would be a fun way to look into that theory. Everything stated from this point on should be taken with a grain of salt. Be that as it may, the end results should at the very least be considered. With 250 points of data collected as objectively as humanly possible, there could be some validity to the results.

Lastly, I would like to emphasize that in no way am I suggesting that racism and other prejudices are nonexistent and do not play a role in society. Statistics still reveal that minorities tend to make less than the majority, and a disproportionate amount live below the poverty line. Since, however, we no longer live in a world where minorities are blatantly rejected because of their skin color, sex, etc. there must be some other factor keeping that statistic relevant. Socioeconomic background makes more sense to me in 2016.

Beginning with Episode 335 with Todd Solondz and ending (coincidentally) with the epic show featuring President Barack Obama, here are the results:

Broken into six tiers, the upper half of the socioeconomic ladder makes up for 70 percent of those interviews analyzed. According to the U.S. Census Bureau, the top five income tiers (of a total of nine) in its survey accounted for 52 percent earners. Below is a screenshot of how the Census Bureau broke income down into tiers, with the classes in the above chart arbitrarily assigned accordingly:

According to the U.S. Department of Health and Human Services’ 2015 poverty guidelines, poverty lines range anywhere from $11,770 to nearly $41,000, depending on how many people per household. With four people in the house, the poverty line is at $24,250. Since the average American household includes 2.58 people per the 2010 Census, the “poor” designation is fairly accurate.

From there, whether or not the rest of the class assignments are accurate will vary depending on one’s definition and other factors, including location and number of children. Keeping with the theory of six separate classes, the above distribution seems fair.

Now let’s take a look at the stats when adjusted for advantage points due to location or family ties into the business:

Break it down even further, and we can see what type of advantages belongs to which socioeconomic status: 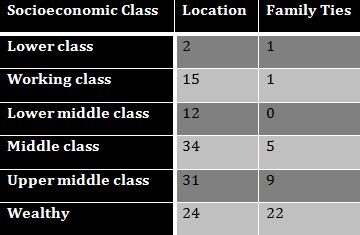 You may notice that the numbers exceed the percentages mentioned above. This is because some interviewees had both advantages. Not surprisingly family ties fell into the top two categories. Success in the entertainment business usually results in financial success as well. All things considered, living near the industry appears to be a fairly important aspect.

Over the past several decades, overt racial discrimination has significantly declined in the United States. We went from explicitly denying minorities any opportunities to making it illegal and socially unacceptable to deny anyone a job due to race. Minorities have since been in positions of power and wealth.

Does that mean we live in a post-racial society? Hardly. According to the U.S. Equal Employment Opportunity Commission, 88,778 workplace discrimination charges were filed for fiscal year 2014. Of those charges, approximately 35 percent were racial in nature, which has been a steady percentage over the years. We are better off than we were 50 years, but still have a long way to go.

Sexism, like racism, goes with us into the next century. I see class warfare as overshadowing both. – Constance Baker Motley

With that said, suggesting that socioeconomic upbringing is the primary factor to determine future success does not also suggest that race is not an issue. Consider this: Of the 10 interviewees rated lower class, five were black (plus one Hispanic). In total, 16 black people were interviewed, making nearly a third of black interviewees ranked in the poverty category. According to the 2013 U.S. Census data, 37.7 percent of blacks in the U.S. fell in the bottom two income categories. Conversely, only 21.9 percent of whites fell under the bottom two income categories.  Although nearly a third of black interviewees falling in the lower class ranking seems considerably high, it is still lower than the more than a third of black Americans across the board.

Another factor to consider is the era one grew up in. Was it more likely for someone in The Greatest Generation to succeed from a lower socioeconomic upbringing than a member of The Millennial Generation? These stats certainly will not answer that question, but any type of pattern could at least suggest a correlation.

Before looking into that, we should define the date range of each generation. According to the Pew Research Center:

Based on the above breakdown, below are the results of socioeconomic upbringing by generation:

It is worth noting that Baby Boomers and Generation X represented nearly 80 percent of the interviews in this study, whereas The Greatest and The Silent Generations represented only 7 percent. It is difficult to glean any meaningful information with a lopsided representation.

With that said, there doesn’t seem to be any trend with those from poor families. Working class and lower middle class families, however, trended downward, with none represented within the youngest generation.

Based on the limited and not-so-random data, the numbers show that there are fewer people in the lower half of the socioeconomic ladder achieving success, relative to the percentages in the general population. You can extrapolate from that however you wish.

I encourage anyone in a position to do so to expand on this research and do a more scientific study that shows the correlation (if any) of socioeconomic upbringing and future success. I’m confident that a more comprehensive study will yield similar results.

For many, this conclusion may seem obvious. Of course lower income households struggle to succeed compared with their more well-to-do counterparts, you may think. If that’s the case, then we need to start asking the questions “Why?” and “How can we solve this problem?” Equality is a major issue in modern day society, and the socioeconomic divide may be the largest disparity facing current and future young generations.

One thought on “WTF are the advantages of socioeconomic upbringing?”