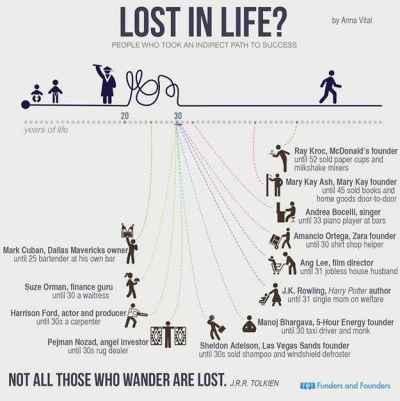 The above infograph is for the average person 30 and older, i.e. miserable, poor people. These millionaires and even billionaires are just like you and me! That must mean you and I can be millionaire success stories too!

In the first installment, we discussed why you will never be Mark Cuban, Suze Orman, Harrison Ford or Pejman Nozad. This time, we’ll explore the uninspiring success stories of Ray Kroc, Mary Kay Ash, Andrea Bocelli and Amancio Ortega.

According to the infograph, the guy responsible for McDonald’s empire didn’t do shit with his life until his 50s. That buys me another 20 years of dicking around. Awesome. 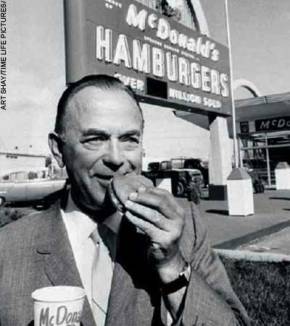 Notice how I said “guy responsible for McDonald’s empire” rather than “McDonald’s founder.” That’s because the idea that Kroc founded McDonald’s is a Kroc of shit.

What is true is that Kroc was a milkshake mixer salesman until he was 52. He sold some mixers to the McDonald brothers who owned a small chain of very unique restaurants. What made these restaurants so unique was its fast food style of operation. McDonald’s is credited with being the first hamburger restaurant that most associate with the term “fast food.” It was revolutionary before Kroc even showed up.

McDonald’s as we know it started in 1948 and began franchising in 1953. In 1954, Kroc recognized the potential and asked to provide his business services. Good timing on his part, because the McDonald brothers needed a new franchise agent. He was hired.

Here’s the thing about Kroc: He was greedy. The McDonald brothers were not. The founders had no desire to expand any further since they had made enough money, but Kroc wanted more. He ended up buying the company from the brothers for about $1 million each.

Essentially, Kroc saw opportunity in a young, thriving company owned by two not-too-ambitious brothers. He was business-savvy enough to build it into an empire, but wasn’t creative enough to come up with the concept himself.

If you read his Wiki page and other bios, Kroc was a real dick. From Wiki, “Kroc also opened a new McDonald’s restaurant near the original McDonald’s (now renamed “The Big M” as they had neglected to retain rights to the name) to force it out of business.”

If you’re a major asshole with a keen sense of business that is willing to exploit the hard work and innovation of someone else who just happens to be looking for a business partner when you ask, I suppose you could also be Ray Kroc. Otherwise, you’ll continue to sell products to those innovators well beyond your 50s.

As the narrative suggests, Mary Kay Ash was just a door-to-door saleswoman until she was 45. Over the hill, she started a cosmetic business that to this day the old lady at work swears will earn her a pink Cadillac someday. 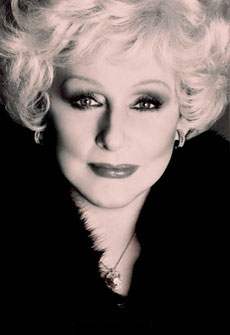 At face value, this story is true. However, two things are missing from this story that changes the context: time and money.

Mary Kay was born in 1918 in Texas. This was during a time when girls got married at 17 because they weren’t allowed to work meaningful jobs, which is exactly what happened to Mary Kay. Women worked a bit more during World War II while the men were fighting overseas. For Mary Kay, that meant selling books door-to-door.

When Mary Kay divorced at the age of 27, she worked for a home products company and did quite well. However, this was still around the early half of the 20th century, so May Kay was turned down for a promotion she rightfully deserved to a man she had trained. She left that job in 1963 to start her own business.

Now 45-years-old and it being the 60s, a decade where minority rights and opportunities were starting to be accepted and realized, Mary Kay was ready to go. But not without the help of her oldest son who would loan her $5,000 to get started. Doesn’t sound like much, but adjusted to inflation, that’s nearly $40,000 in 2016 dollars.

The rest is history.

Society was not very kind to women when Mary Kay was young. She would have to wait until our culture became more welcoming to women in higher positions in business and having a successful son to front her some startup capital. Considering the time, Mary Kay had a damn good excuse to wait until she was 45.

So if you were oppressed as a young adult and now live in improved conditions and have access to $40,000, good news! You can be the next Mary Kay!

A lot of you probably have no idea who this guy is. In short, he’s a blind, Italian classical tenor singer. He’s 58 at press time, but he has only been successful for about 25 years, which is not long for a musician/entertainer that old. 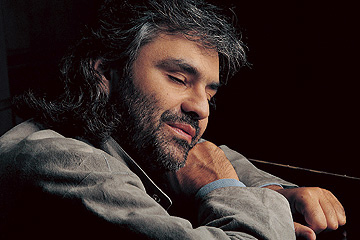 Motivational images such as the one above would love to tell you he struggled as a piano player at bars until he was 33-years-old. Like most everything else motivational speakers will tell you, that information would be full of shit.

Like many (if not most) successful musicians, Bocelli got started pretty young, taking piano lessons at the age of six. He would go on to learn to play at least six other instruments, recognizing opera voices at seven, took lessons with Luciano Bettarini and won a singing competition at 14. He’s not even old enough to drive, yet he already has more talent than you.

We could stop there, but I’m going to go Belichick on this story and run up the score even though I have secured the win.

Bocelli went to law school in 1980, and according to Biography.com, took up playing piano in bars to pay for his lessons with Franco Corelli. It’s not like he was a struggling bar musician. Dude was paying for lessons with a world-famous opera singer while becoming a lawyer.

In 1992, Bocelli sent a demo for some song co-written by Bono (yes, of U2) for Luciano Pavarotti who then co-performed the track with Bocelli and said track was a “Europe-wide smash hit.”

Yes, he was in his early-30s when he got his first break. But it’s not like it was some sort of undiscovered talent that popped out of nowhere and BAM! he’s famous. He was taking lessons with super-talents up until that moment.

Let’s also not forget that this is classical/opera music we’re dealing with. Good luck breaking into the mainstream music scene at the age of 33. No teenage girl wants a poster of someone who is old enough to be their dad.

On the bright side, if you’re someone who has had a musical gift since childhood, honing that skill with other gifted musicians, and wants to break into the old people music business, you might also get a huge break someday. Good luck!

If you don’t know who this guy is, you should. Only Bill Gates has more money than him. Seriously. He’s the second-richest person in the world with a net worth of $67 billion. I really hope he truly has a story we can all relate to. 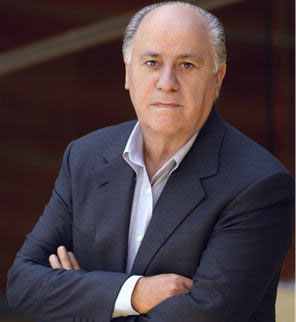 To start, Ortega did not come from a privileged background. He left school at the age 14 as a result of his father’s job, a railway worker. Around this time, he found a job as a shirtmaker. From there, it’s all a blur since no one really knows much about Ortega, a man who remained out of the spotlight by never granting interviews and rarely seen in public.

According to this biography, “At the age of 16, Amancio Ortega was pondering on how to figure out potential client desires and, what is even more important, meet that demand.” In the 1950s, Ortega was organizing sewing cooperatives in a town with low employment and many single women. He would have been in his 20s at around this time.

Ortega founded his first company in 1963, making him 27 years old. In 1975, Ortega opened the first Zara store. For those not in Europe, Zara is the company that made him billions. He would have been 39 years old then.

So the claim he was a “shirt shop helper” until he was 30 is not at all accurate. By his early 20s, Ortega was running a sewing cooperative that not only gave him a decade’s worth of experience in management before opening his first company, but also gave him a reputation within the fashion/textiles industry.

Let’s not forget that he opened that first business at the age of 27. Before the age of 30, Ortega had about 10 years of experience in the industry and management in addition to being a business owner. It would take a little more than 10 more years from that first business before Zara became a thing, but it’s not like Ortega wasn’t well on his way to success before then.

Ortega’s story is a real life rags-to-riches story, sure, but the idea that he was a late bloomer in his success is completely false. He was working in textiles at the age most of us are entering high school and can’t even drive. He was a business owner before most of us are thinking about purchasing our first house.

Unless you have been working in an industry since you were 14 and opened a business in said industry before you turned 30, there’s almost no chance you’ll become the second-richest person alive.

The next and final installment of “Success at a Late Age” will look into the success stories of Ang Lee, J.K. Rowling, Manoj Bhargava and Sheldon Adelson. So far, we’re 0-8, so maybe we’ll find some common ground with one of the final four.

Related stories: Success at a Late Age (Part I)

2 thoughts on “Success at a Late Age (Part II)”